Perfect for beating the heat

It has finally happened! The famous Starbucks Pink Drink has landed in Singapore.

Six years after its birth, the Starbucks Pink Drink is now available in Singapore.

This social media-famous beverage was born in 2016 thanks to customers who asked baristas to use coconut milk instead of water for their Strawberry Acai drink. It then became part of the “secret menu” but was eventually added to the official menu in 2017.

The aesthetically pleasing drink started making rounds on social media again when the Starbucks Pink Drink Remix became viral. It’s basically the same beverage but topped with vanilla cream cold foam. While the remix version is yet to hit The Little Red Dot, the original Pink Drink is now available.

The creamy and fruity Starbucks Pink Drink with Strawberry Acai (SGD7.10, Tall) is made with fresh strawberry slices and sweet coconut milk. Fruit juice is also added for a citrus touch.

You can also enjoy a milkless version of the Starbucks Pink Drink.

If you prefer a milkless version, there’s the equally pretty Starbucks Strawberry Açai with Lemonade (SGD6.60, Tall). This zesty lemonade features real strawberry slices, acai and green coffee extract.
You may have these beverages served in a fun limited-edition pink reusable cold cup for an additional SGD9.90. Do note that the cold cup is not for sale separately from the drinks. 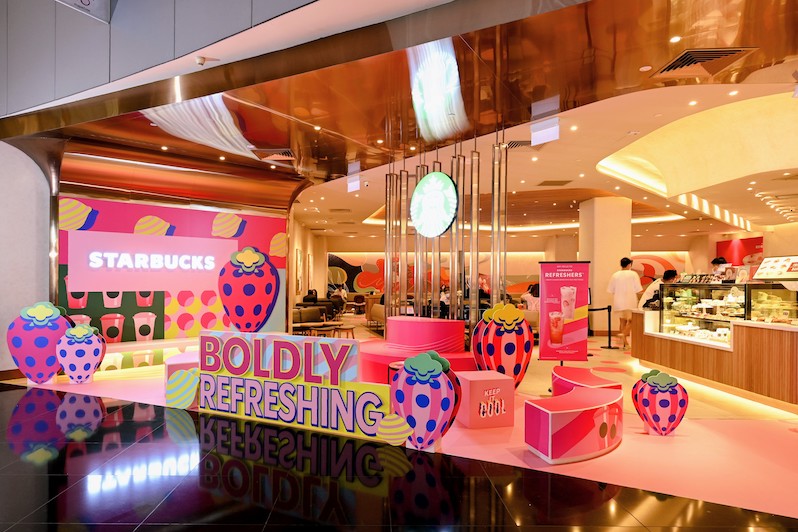 Next, check out the best Korean cafes and restaurants in Singapore.

More On This Topic
NewsLifestyle

Keep An Eye Out For This OATSIDE Chocolate Van In Singapore

HungryGoWhere Singapore Is Back

Add Dior's New Store In Seoul To Your Travel Bucketlist