From diversity to calling out the Fat Monica jokes

Gain a new perspective as we look back at iconic films, books and TV shows in our Rewind & Review series, where we appreciate the roles they have played in their time and reimagine iconic scenes in today's narrative.

“This is all moo[t] point,” said Joey Tribbiani — and it seems like that is still the case with the hit 90s sitcom FRIENDS even after a quarter of a century since it aired. Despite the continuous debates about its overarching themes, this iconic American sitcom still remains to be one of the most well-loved and well-recognised TV shows to ever hit the small screen. Until today, FRIENDS, which ran from 1994 to 2004, is still amassing its share of fans, young and old. This longevity even warranted a much-anticipated TV special, one that was supposed to air early this year if not for the pandemic.

However, along with the waves of laughter and heartaches that the Central Perk gang has brought us over the years come a new sense of consciousness and criticisms about its arcs — which begs the discussion: some of its arcs didn't really age well, did they?

From diversifying the main characters (all white characters, really?) to addressing the negativity about body image (think about all the Fat Monica jokes), I am calling for better representation to the FRIENDS narrative – if we were to recreate the sitcom in 2020. Let's explore the must-revisit moments and paradoxical timelessness of this phenomenal TV show.

Diversity within the Central Perk gang

While the series itself had its share of characters that are of the minority — black and Asian guest stars, LGBT representation, and so on — one glaring fact about this series is its lack of diversity concerning the core six. Sure, the background of the characters are all interesting and non-monotonous, but at the end of the day, it’s still pretty much under-represented. All white characters, really?

With the help of Singaporean illustrator Josephine Tan, we address this issue with a reimagined cast, set with the series’ iconic title card as its backdrop. 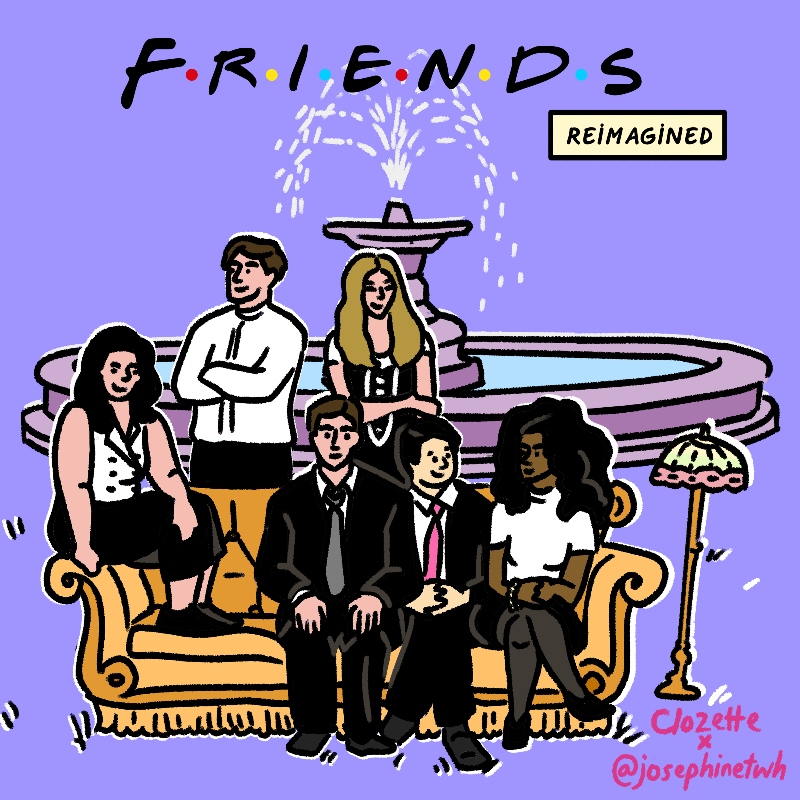 Among its many issues, the series can achieve a significant change in dynamics by diversifying its main cast.

In our version of the FRIENDS cast, we went with an Asian Chandler Bing who, unlike his original counterpart, is unafraid to embrace his feminine tendencies; a black Rachel Green who holds the main protagonist role in the series; and a curvy Monica Geller who, instead of being a constant joke in the original narrative because of her physique, becomes one of its most empowering characters.

Despite this, with no intention to antagonise the rest of the characters simply because they’re white (as doing so defeats the purpose of highlighting diversity, after all), we stuck with the original depiction of our quirky duo Joey Tribbiani and Phoebe Buffay, as well as Ross Gellar who has often championed his Jewish culture in the show. What do you think?

Speaking of the TV shows’ modern-day critiques, it is important to highlight not just the minuses but also the pluses the series has brought to the table considering the timeframe it was conceived.

Looking back, it’s easy to see why people have issues with the way the series handled certain themes. For one, Ross' ex-wife Carol and Susan’s lesbian relationship has often been the butt of the joke among the main characters. A lot of tirades were also made about Chandler’s drag queen father, which blatantly reeked of transphobia. Fragile masculinity also laced the narrative quite often among the male characters. And of course, who can forget the endless ‘Fat Monica’ jokes? But were they really as bad as people say or is it just a case of today’s call-out culture and excessive pandering?

Good luck with your flirting in 2017!

On the surface, these issues definitely painted FRIENDS in a bad light. But after revisiting and reviewing the series, it did redeem itself (albeit partially and still lacking — very debatable) when it came to the narratives in question for me.

Starting off with Carol and Susan, there was an episode sequence dedicated to their wedding, which was quite refreshing considering that spotlighting on LGBT relationships were minimal in the 90s. Their constant presence in the series was also not painted as antagonistic, but rather served as a comforting contrast to Ross’ rather petty behaviour (sometimes). When Ben was born, Ross and Susan — with the help of Phoebe — also ended up reflecting on their unconventional family dynamic, which led to a partial reconciliation between the two.

It even tapped into the struggles of same-sex couples when it comes to establishing a family unit, especially given the prevalence of discrimination that is still very much relevant today. My side of the argument is not to excuse the crude jokes, of course, but on a viewer's perspective, it said more about our main characters' problematic behaviours — mostly Ross — rather than Carol and Susan themselves.

Onto Chandler’s relationship with his father Charles, re-watching the series made it clear that the resentment Chandler had over his father was not due to the cross-dressing or being a drag queen, but rather from the feeling of abandonment and betrayal that came with his parents’ divorce. Chandler was not depicted as someone who favoured his mother over his father but rather as someone who has reservations for them both, proving that it is not about their sexuality, their preference or their lifestyle that he despised, but rather how they handled their relationship as a family. Their reconciliation during the Mondler wedding definitely resolved this conflict and was handled rather tastefully despite the typical pop-culture treatment of LGBT characters at the time.

A look into fragile masculinity

When it came to fragile masculinity, the boys of the main crew often shy away from what’s considered feminine actions, with instances like Chandler’s feminine instincts or Joey’s preference for his Ralph Lauren man purse being at the receiving end in the "The One with Joey's Bag" episode. Still, when it came to situations that mattered, these two best friends are portrayed as openly affectionate and emotionally supportive of one another, as well as to the rest of the group.

Even Joey’s womanising has often been called out by the circle multiple times, providing arguments about the double-standards often placed in women if they happen to be serial daters. The expectations for both the men and women in the gang are definitely on par with one another, which says a lot about gender equality dynamics that still apply in today’s standards.

And sure, these storylines could have been treated better. Nevertheless, we have to admit that its best efforts hold certain merit considering that these themes are only being inserted in today's context after years of pushing and shoving.

The looming negativity over body image

With all these said, if there’s one criticism the series can’t escape is its treatment of ‘Fat Monica’. Despite its multiple attempts to salvage this narrative by either showing us how happy Monica was with her own body or revealing that even in an alternate universe she will still end up with Chandler despite being curvy, the show’s failure to call out the characters for always treating ‘Fat Monica’ as a spectacle or a joke is a huge shame. Her bulimic past was also mentioned in passing but never explored, which makes it one of the sour points of the series I can never get over.

FRIENDS is, without a doubt, a product of its time. From its format to its fashion to even its themes, it is a diorama of a life that speaks to people in the 90s, while still depicting arcs about friendship, romance, and day-to-day nuances that is ever-relatable today. 2020s obsession with retro and throwback trends also added to the appeal of this sitcom to the present-day youth.

If we zoom in on the characters themselves, there's also something about Rachel, Ross, Monica, Chandler, Phoebe, and Joey that feel so utterly human.

It also portrayed empowered women who embrace their sexuality and femininity without necessarily portraying them lesser than their male counterparts. They are not one-dimensional; rather, they have agency over their decisions, their self-expression, and their goals, which is in line with today's goal to push for strong, relatable, and realistic female characters in mainstream media.

A perfect example of this would be the ongoing debate as to whether or not Rachel should have really gotten off the plane at the end of the series, choosing her romance with Ross over a promising career in Paris. While some people argue that a long-distance relationship would’ve been the best conclusion for the two, it also makes us question if invalidating Rachel's choice presents a reality that women who choose love or family over work — or choose to balance both — are often viewed as less empowered. Something to think about, perhaps?

Most importantly, the show propagated the idea that family comes in all forms. These six people found a sanctuary in one another despite each of their toxic pasts — be it the bitter truth about Chandler’s parents’ divorce, Phoebe’s mum committing suicide and her estranged relationship with Ursula, or even Monica’s overbearing relationship with her parents.

Would FRIENDS still be a hit in 2020? Yes, I believe so. While I know there will never be a perfect scenario that can address every issue that we have on hand today — if we were to reimagine the FRIENDS characters, a curvier Monica, along with a slightly more diverse cast in terms of race, would be on top of my wishlist.

There was indeed a lack of representation in some areas, but FRIENDS checked off a variety of narratives that are applicable, relatable and diverse to a considerable extent. At the end of the day, despite its shortcomings and (some) problematic plot lines, FRIENDS definitely performed a lot of firsts during its run that even present-day TV shows have yet to achieve and get right. This, along with its humour and sharpness on the surface, marks its place as a timeless TV classic with a legacy that will certainly last for another quarter of a century.

Read up on the rest of our Rewind & Review series here.

Should You Watch The ‘Gossip Girl’ Reboot? Here’s The Truth

Catch Tomorrow x Together (TXT) In These Southeast Asian Concerts

One Of Singapore’s Most Famous Nightclubs Is Open Again