Treat yourself to these fantastic eateries and restaurants

Take a trip up the idyllic Dempsey Hill enclave and be treated to a smorgasbord of eateries and restaurants spanning glitzy Michelin star-spangled Burnt Ends and Candlenut to cosy, feel-good brunch spots such as Huber’s Bistro, Hathaway, COMO Cuisine and many more. The options available will leave a fickle girl in a bit of a pickle but we’ve narrowed the choices down based on what we personally love most. Poised to spend the day eating good and drinking well? Hurry book a table at one of these 10 Dempsey Hill restaurants. A quick gateway to Greece against the backdrop of Dempsey Hill’s beautiful lush greenery, Blu Kouzina is where you come to Indulge in the comforts of authentic Greek food inspired by the flavours and confluences of the Mediterranean regions, good wine and warm hospitality.

The quality of the experience and the food is owed to their willingness to invest in the best ingredients, giving diners the most authentic glimpse into true-blu (pun intended) Mediterranean cuisine. Their pita bread is specially imported from Greece and goes superbly with their array of dips including the classic Hummus and Taramasalata. The latter is a dip of white cod roe, lemon juice, and capers. Securing a reservation here is not an easy feat but we promise it’s well worth it. Despite being a meat-forward, fundamentally barbecue-driven restaurant, the food is anything but ordinary—no shrimp on the barbies here. No, don’t expect ordinary beef at this one Michelin-starred Aussie-style restaurant. Instead, think of luxe reiterations of primitive barbecue harnessing fine-dining techniques and profound respect for good quality products. The show-stopping mainstay of this modern Australian restaurant is their custom-made ovens which burn to as hot as 1000 degrees Celcius.

Dishes you absolutely can’t leave without trying to include their King Crab & Garlic Brown Butter, Pulled Pork Sanger and their fan-favourite, Beef Marmalade and Pickles served on house-baked sourdough. 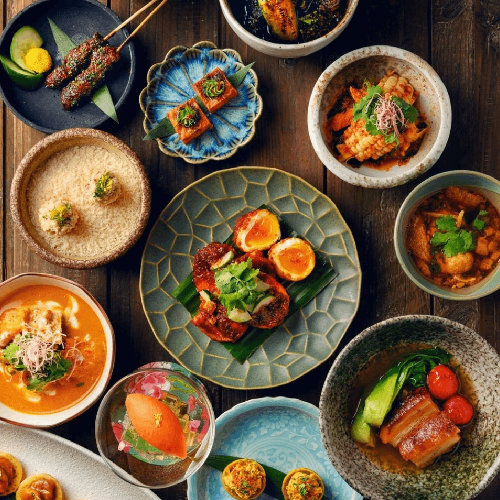 A local icon that hardly needs an introduction, many will recognise Candlenut as being the world's first and only Michelin-starred Peranakan restaurant. Perched up on Dempsey Hill, Candlenut takes a contemporary approach to traditional Straits-Chinese cuisine without any compromise on authenticity. Headed by Singaporean chef Malcolm Lee, Candlenut offers a mix of traditional and modern Peranakan plates elevated using premium ingredients.

The food that Chef Malcolm puts out is a reflection of his deft use of ingredients from the South-East Asian pantry as well as a homage to his Peranakan heritage. The King Tiger Prawn, featuring local ingredients such as gula melaka coconut sauce, lemongrass, and Thai basil, is a huge hit. Make it a point to try his Blue Swimmer Crab Curry too while you’re at it. If you’re someone who enjoys omakase meals, Candlenut offers a similar dining experience as well—the first of its kind—cheekily named their Ah-Ma-Kase tasting menu. Set against the stunning backdrop of Dempsey Hill’s luscious leafy locale, Chang Korean Charcoal BBQ Restaurant is one Korean barbecue joint that punches above the rest in terms of quality and service. While a tad pricier than most, their carefully curated menu features a mix of traditional and modern foods that prove not only delicious but also healthy as well.

If you’re on a budget, go for one of their set lunches that promises a good selection of premium cuts that’ll have you feeling stuffed at no more than $50 per diner. 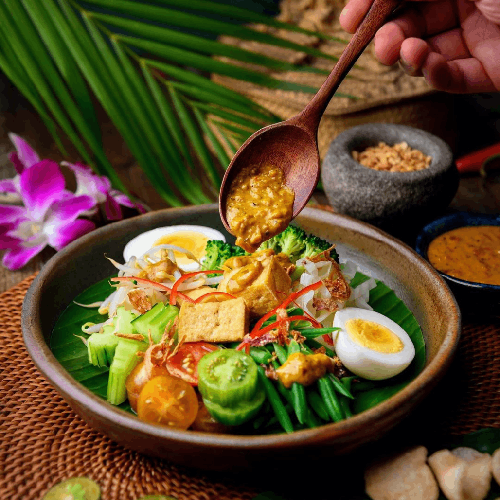 Helmed by Executive Chef Timothy de Souza who has spent much of his career working in numerous far-off locales such as Maldives, Japan and Australia, the philosophy surrounding the food that COMO Cuisine puts out is largely centred around these pillars: familiar, contemporary and wholesome. The food at COMO Cuisine is fresh, and modern and pays homage to Singapore's culinary traditions and the region’s rich cultural heritage, with standout dishes such as their Maori Lakes Lamb Cutlet and Kingfish Sashimi.

If you're looking for a dish with a regional slant that’s big on health, we urge you to try their Gado Gado. Comprised of freshly chopped vegetables, fluffy fried tofu with a crisp skin and perfectly done eggs, drizzled with a rich peanut sauce to tie it all together. If you’re looking for a place to impress a date, Hathaway is where you bring her. The restaurant itself is gorgeous but so is the lush greenery and serenity that surrounds it. Hathaway’s menu seeks to capture the context of time and place through the lens of modern Asian cuisine.

Crowd favourites include their Octopus Bakar & Sambal Udang, their signature chee cheong fun which is paired with razor clams submerged in a miso kombu broth reduced down with sablefish bones, as well as perennial brunch favourites such as their Pengat Pisang French Toast. 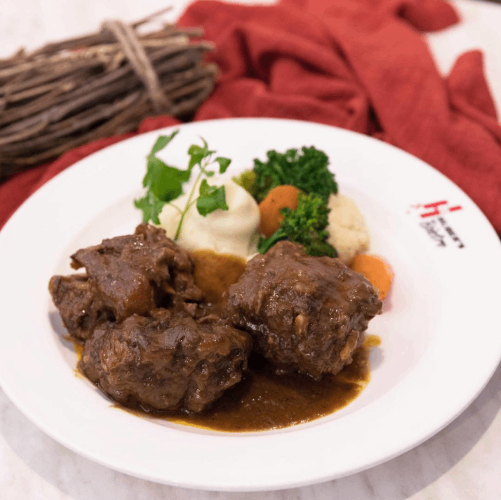 Besides being one of the best places to visit to stock up on premium cuts, artisanal cheeses, and cured meats, this Swiss Butchery even boasts a bistro right out front on the first level of its premises where diners can tuck into quality cuts of premium beef without having to spend a fortune—their meats are literally butchered on site!

Other Swiss-inspired delicacies to try include their Chicken Schnitzel Sandwich, their Braised Oxtail “Printanière” as well as their extensive selection of sausages. If you do opt for the latter, you’d be wise to pair it with a serving of sauerkraut, spaetzle and a frosty glass of Swiss beer too. What’s better than indulging in a full-on seafood feast in gorgeous alfresco dining amidst lush natural greenery against the backdrop of idyllic Dempsey Hill? The answer’s nothing. Long Beach remains the leading seafood restaurant and creator of the original and best black pepper crab since 1982.

Coated with piquant black pepper sauce and stir-fried, the Original Black Pepper Crab is a signature seafood dish that’s an ambrosial ensemble of fragrance and savouriness. Another crowd-favourite is their Scottish Razor Clams that comes steamed in a light and aromatic sauce mixed with finely-minced garlic and vermicelli. 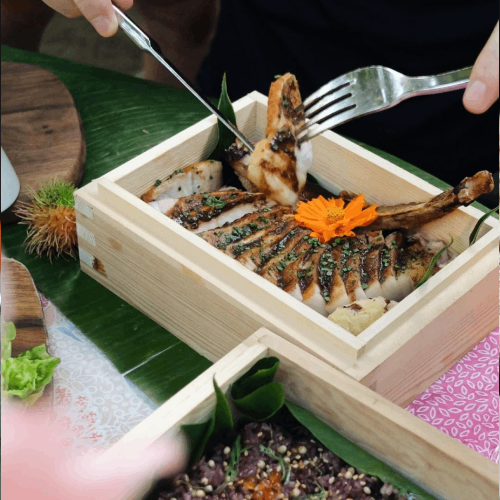 Nestled up on a hill amidst a vast sea of lush floral and fauna, this open-concept farm-to-table eatery is big on self-sustainability with farming and foraging a major factor in many of their culinary endeavours—hence the name.

Here, diners can dig into innovative and hearty European dishes prepared using fresh and sustainable ingredients sourced from their own gardens as well as local and regional farms. The flavours here are simple yet robust, focused on local farms and heritage, as epitomised by the Laksa Pappardelle, made using soft shell prawn tempura, a spicy coconut-based sauce and fresh laksa leaf plucked straight from their garden. Their Barramundi is also excellent. Straight from the waters off Pulau Ubin, this luxe dish combines a sumptuous umami-loaded seaweed butter and puffed black rice crumbled over to give it a textural contrast. 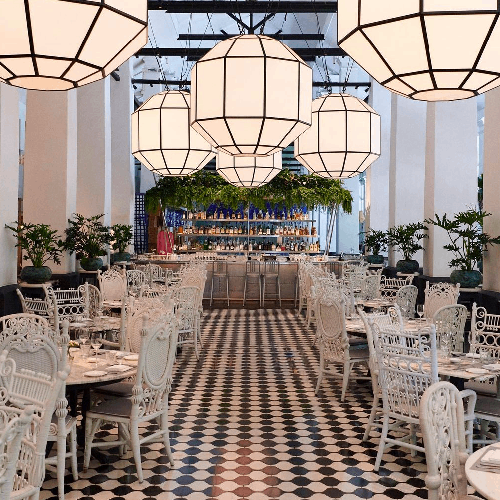 The Dempsey Cookhouse and Bar

Refined and elegant, The Dempsey Cookhouse & Bar is set in the midst of vibrant COMO Dempsey, a 160-seater establishment that exudes elegance and an effortless charm.

All the magic happens in its open kitchen where cooking is elevated into a literal art form. Notable signature dishes made famous by superstar chef and restaurateur Jean-Georges appear on the menu here, such as his world-famous Caviar Toast and Egg Caviar that’s composed of a warm and oozy egg capped off with caviar and herbs. Other standout dishes include the Crispy Salmon Sushi and Prosciutto Wrapped Pork Chop.

Next, check out our guide to the 10 best burger joints in Singapore.