Comfort food at its finest

On a list of what Singaporeans consider to be “comfort food”, you’ll more than likely find Peranakan cuisine among the top few contenders. Peranakan food was invented from the subculture birthed from the inter-marriages between Straits Chinese and Malays which merged both Malay and Chinese cuisine into one. Peranakan cuisine stands out for its rich textures, and complex flavours yet remains an affordable and rustic form of sustenance in many traditional Peranakan households. The truth is, it’s a dying trade and the reason for it is that making these time-honoured heritage dishes as authentic as possible takes a long time to master.

Traditional Peranakan food meets fine dining finesse over at Candlenut. A Dempsey mainstay that needs no introduction, many will recognise Candlenut as being the world's first and only Michelin-starred Peranakan restaurant. Perched up on Dempsey Hill, Candlenut takes a contemporary approach to traditional Straits-Chinese cuisine without any compromise on authenticity. Headed by Singaporean chef Malcolm Lee, Candlenut offers a mix of traditional and modern Peranakan plates elevated using premium ingredients. Among his repertoire of stellar crowd-favourites, we absolutely go mad for his Blue Swimmer Crab Curry. It’s a hearty amalgamation of rich flavour, piquant spice and unrivalled savouriness best enjoyed ladled over rice. 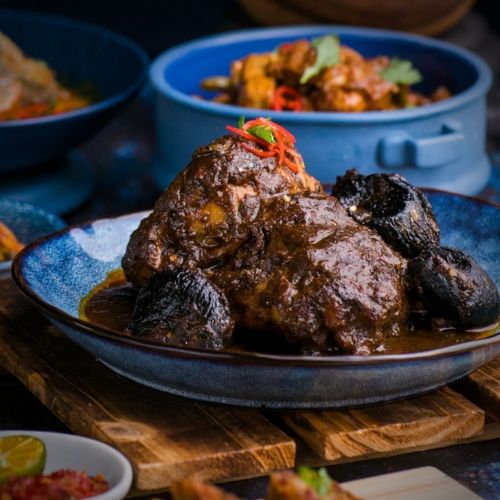 A restaurant that dabbles in both traditional Peranakan homestyle cooking and modern techniques, Godmama is one restaurant that deserves a visit. Perched on the fourth floor of Funan, the latest lifestyle destination located in the heart of the Civic District, Godmama boasts sleek indoor setting, as well as a beautiful alfresco area for lounging over light bites and Nonya-inspired cocktails—their Peranakan Blue (butterfly pea gin & tonic), is a hot favourite. Dishes you should definitely try if it’s your first time include their Lamb Shank Rendang, Ayam Buah Keluak as well as their All-Star Egg Skin Popiah. Operating out of humble shop space on the basement level of Golden Mile Food Centre, Charlie’s Peranakan Food is where you go for a taste of proper homestyle Peranakan food that’s impressive yet affordable. Their selection of dishes isn’t many but among the humble selection, you’ll find familiar favourites as well as some more “exotic” dishes. Their Ayam Buah Keluak is a heavy hitter that bursts with complexity, boasting a mix of savoury sweetness and subtle bitterness. Other crowd favourites include their Gulai Tumis (Tamarind Fish Curry) and Nangka Lemak (Jackfruit Curry). 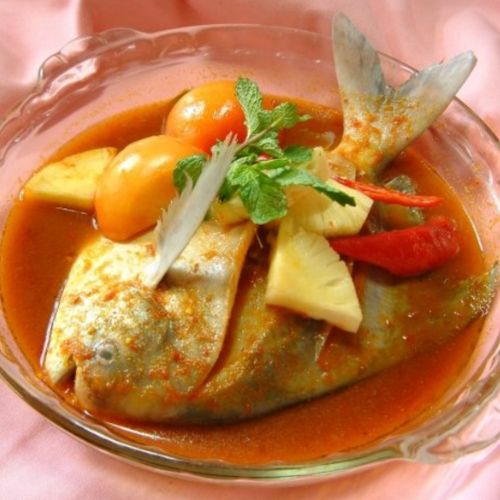 4. Guan Hoe Soon Restaurant
A stalwart of Peranakan cuisine here in Singapore, Guan Hoe Soon Restaurant stands as one of the few remaining bastions for authentic Peranakan food, and we’re not just saying that because they come from a lineage of Peranakan ancestors but because here is where you can find real-deal Nyonya food encompassing certain dishes that have been lost through time—Sambal Timun (spicy chicken gizzard and cucumber salad) being one of them. Serving delicious food since 1953, take a walk down memory lane and delight your senses with their tangy assam pedas pomfret, chap chyes and beef rendang. 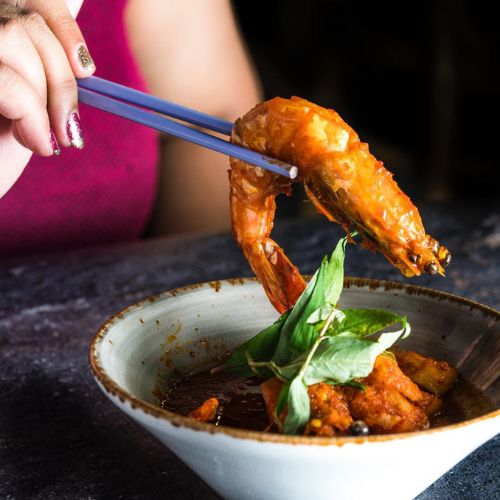 Founded by fourth-generation Nyonya Kathryn Ho, Tingkat PeraMakan is a fast-casual Peranakan restaurant concept that has been around for more than a decade now. Ordering is made seamless here as you get to choose from set menus which include all the favourites on one tray—main dish, two sides, rice, dessert and a drink. Don’t miss out on their beef rendang, babi pong teh (braised pork in fermented soybean sauce) and especially not their sweet and tangy Udang Masak Kuah Nanas! 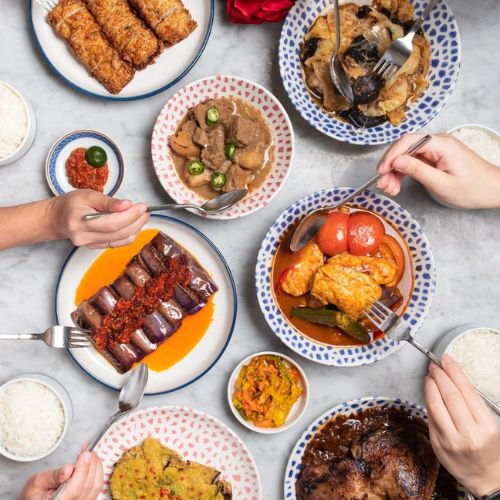 Conveniently located right smack in the heart of the bustling Tanjong Pagar district just a little off Singapore’s Central Business District, The Blue Ginger is an awesome spot for anyone to get acquainted with authentic Peranakan fare. Their selection of dishes is wide and varied catering to spice lovers as well as those who prefer their food a little more tame without compromising on comfort and flavour. We never leave without ordering their crispy Ngoh Hiang and Babi Pongtay but their savoury and sourish Ikan Masak Assam Gulai is a one-way trip to gastronomic heaven. Still got room for dessert? End your meal off on an indulgent note with their Durian Chendol. 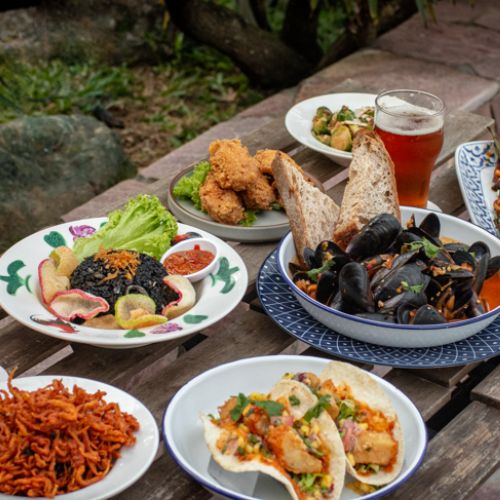 7. Orh Gao Taproom
A place where lasting friendships are forged over tasty Nonya-inspired delights and craft beer, Orh Gao Taproom is a place you just know your crew and you be well taken care of. This bustling spot is heavily patronised for its everchanging craft beer taps and extensive natural wine selection, sure. But it’s the food that truly astounds me. On the food front, you can’t go wrong with their Sotong Bakar, Beef Rendang and newly introduced Sambal Curry Mussels. Oh, and if you’re a sucker for fried chicken, their Har Cheong Gai is phenomenal. 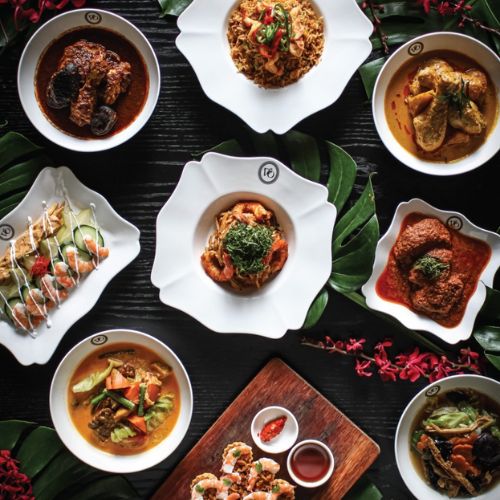 Opened by Violet Oon, Singaporean celebrity chef, restaurateur, and food writer known for her food columns, cookbooks, and various Peranakan restaurant concepts, National Kitchen by Violet Oon brands itself as a Peranakan restaurant that prides itself on authenticity with a touch of contemporary flair. It’s almost an unspoken rule that no one begins their meal with anything but their crispy, fresh and ultra-gratifying Keuh Pie Tee and Ngoh Hiang, before going full-on beast mode on heartier mains such as their indulgent Daging Chabeck Beef Cheek. 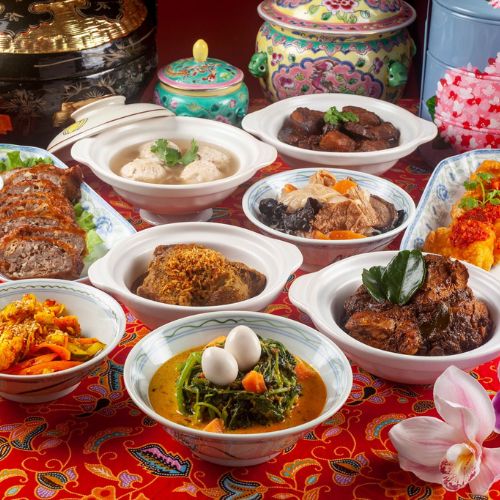 A restaurant that’s stood the test of time, Chili Padi remains one of the few standing pillars of Peranakan food and has been a firm factor of Singapore’s Nonya food scene for decades. This quaint restaurant is nestled away in Joo Chiat and is also renowned for offering catering services that serve up authentic Peranakan fare that’s simply sublime. Specialities to try to include the light yet savoury and oh-so-comforting bakwan kepiting (crab meatball soup), sweet and sourish gula melaka assam prawns and Nyonya fried chicken wings. Perhaps one of the more popular spots for Peranakan food around, IVIN’s is where you come for hearty food that’s both affordable and good enough to inspire fond memories of grandma’s cooking. Their saucier dishes are cooked mostly in claypots and come with copious amounts of flavourful gravy to spoon over your rice. Among the restaurant’s many signatures, dishes we can’t do without comprising their sour-savoury Itek Sio, Udang Nanas and Beef Rendang.

(Photos from: Alvin Tan and @sgfoodonfoot)

Next, 10 Dempsey Hill dining spots that deserve a place on your foodie bucketlist.