Live High At These 10 Fine Dining Restaurants In Singapore

For a place as gastronomically diverse as Singapore, zeroing in on a posh restaurant to indulge in exquisite meals is hardly a challenge. But that’s not to say securing a reservation is an easy feat either. From stalwart names, and Michelin-starred establishments to a handful of new players, here are our 10 top picks for fine dining in Singapore.

Drop by any one of these polished establishments and transport yourself to another world engulfed by grandeur and sophistication. You can’t put a price on unforgettable experiences like these, so we say learn to live a little and spoil yourself. Cure is Chef Andrew Walsh’s — formerly of one-Michelin-starred Pollen Street Social in London and following that, Esquina in Singapore — first venture as Chef-Owner. It's a restaurant that combines top-notch plates inspired by his Irish heritage with Nua Irish cuisine and an unbeatable wine and beverage program that by itself is remarkable. Even through challenging times, the restaurant has managed to clinch a Michelin star consecutively in 2021 and 2022, a testament to the profound quality of the food there and the unwavering dedication of the team that create them. 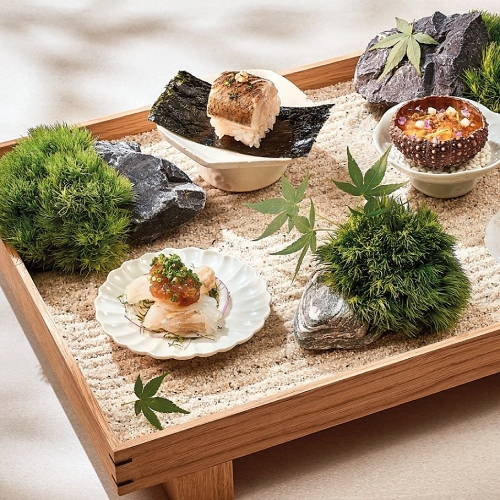 Tucked inside a heritage shophouse along Mohamed Sultan Road, Esora is a kappo-style fine dining restaurant helmed by Head Chef Takeshi Araki and Chef de Cuisine Noboru Shimohigashi. “Kappo” which simply means “to cut and cook”, refers to a less formal way of dining which encourages more intimate interactions between the chef and the diner. On the food front, Esora epitomises modern Japanese cuisine guided by an affinity with nature. Their menu changes frequently and is largely influenced by seasonality. 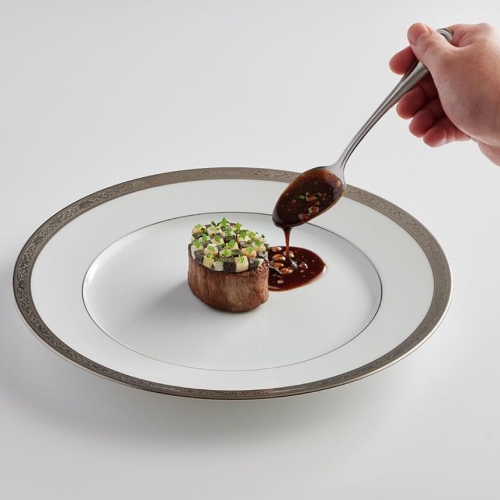 Famed for its exquisite and personable hospitality, Les Amis is worth more than its weight in Michelin stars — for those who don’t know, they have three. This multi-award-winning French restaurant boasts a stellar wine program headed by Herve Pennequin — who was ranked 3rd Best Sommelier of the World by the Association de la Sommeliere Internationale (ASI) back in 2004 — as well as a repertoire of artfully crafted dishes made using ingredients sourced from France. Combining warm hospitality, sophistication in the form of chandeliers, red velvety accents and finesse in the way that each dish is intricately prepared, dining at 3-Michelin-starred Les Amis will always be a treat for the senses. 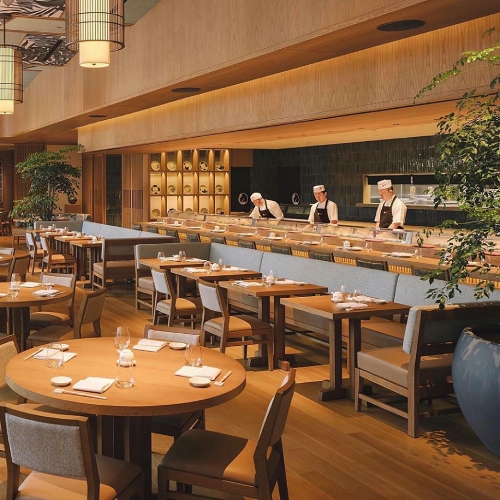 Celebrity chef and restaurateur Nobu Matsuhisa's latest restaurant concept, Nobu, over at Four Seasons Hotel Singapore offers a spritely sense of occasion for whoever dines there. Opt for a seat at the alfresco Japanese garden and surround yourself with lush glades perfect for an evening of romance, or at a table inside that offers picturesque views of the city skyline. In true Nobu fashion, the menu features a mixture of cold and hot dishes, snacks, kushiyaki and sushi, an ambrosial repertoire that is predominantly Japanese, crafted using high-quality ingredients with flecks of Peruvian flavours. A name that’s hardly a mystery these days and is one that evokes thoughts of glamour, sophistication and modern gastronomy of the finest standards, Odette is a timeless dining destination that warrants a visit at least once in your life. Housed in the National Gallery Singapore, Odette is helmed by Chef Julien Royer who, alongside his highly accomplished culinary team, creates wonderful dishes using luxury ingredients of unimpeachable quality. Deft techniques, finesse and creative plating result in dishes of immeasurable quality.

Poisson (pronounced “pwa·son”), which means fish in French, is a French-inspired seafood restaurant helmed by Executive Chef Ma Yee Khang who deftly combines classic French techniques with Asian, British and European flavours spanning a menu that consists of two components: Cold Stream for the starters, and Hot Stream for main courses. The restaurant sources its seafood from fish farms and suppliers that deliver ethically harvested ingredients in a sustainable manner. 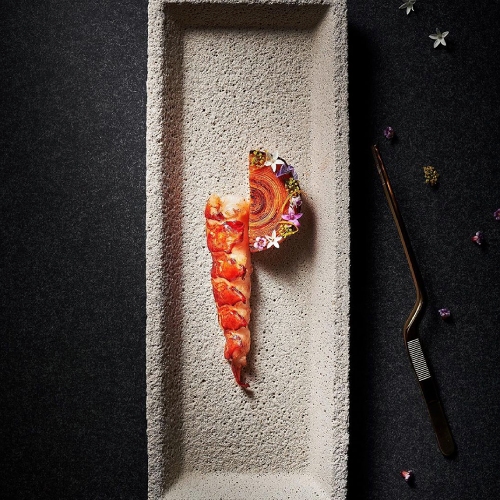 Showcasing Chef Jason Tan’s philosophy of “Gastro-Botanica”, which encapsulates carefully sourced vegetables, meats and seafood, meticulously and thoughtfully prepared to elaborate certain botanical elements such as tubers, herbs, spices, and fruits, Restaurant Euphoria is where native produce gets transformed through elevated techniques. For the case of this botanical-themed fine dining concept, Chef Jason deviates from the signature ‘mother sauces’ of French haute cuisine, formulating a series of new recipes. His signature dish — the Cévennes onion in four ways named ‘My Favourite Vegetable’ — is a key highlight and one that showcases his laser-accurate precision. 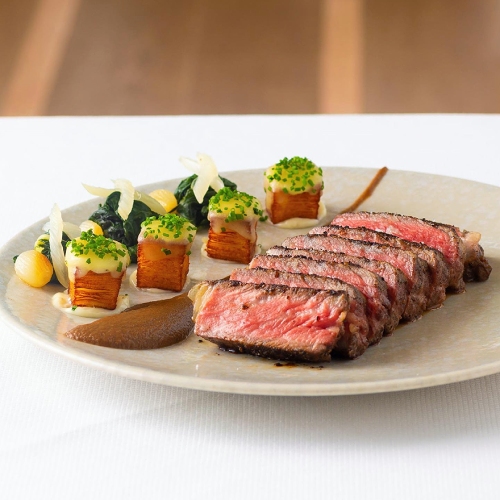 The first international offshoot of Wolfgang Puck’s renowned Beverly Hills restaurant, Spago over at Marina Bay Sands Singapore offers an imaginative and seasonal menu of Californian cuisine armed with local and regional riffs — we recommend starting with the “Kaya Toast”, an elevated dish inspired by Singapore’s iconic breakfast staple comprising seared foie gras, pandan-coconut jam and a velvety foie gras-espresso mousse atop a toasted brioche and working your way up from there. Located at Sands SkyPark at the top of Marina Bay Sands, the restaurant overlooks the famous hotel’s iconic infinity pool and offers spectacular views of the city skyline. Nestled in the heart of the bustling Keong Saik district, Thevar is a contemporary Indian restaurant that dishes out unique twists on traditional Indian fare harnessing modern culinary techniques with spices to make each and every dish sing. Every dish here is a reflection of Chef-owner Mano Thevar's travels and childhood. Think comforting, familiar flavours but elevated with carefully sourced ingredients, finesse and impressive plating. Compelling dishes include the Chettinad Chicken Roti, Tandoori Lamb Rack and Oyster & Rasam Granita. 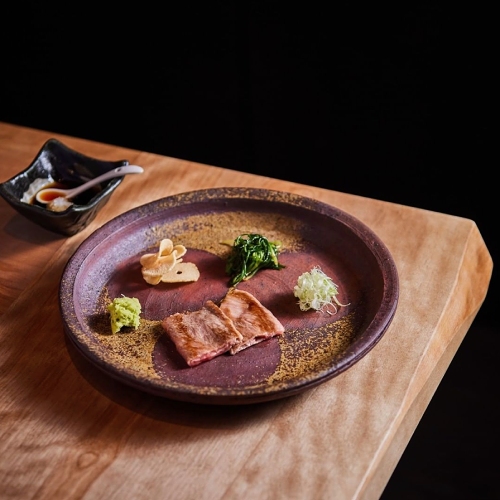 True gourmands looking to be captivated will know to make a booking for Waku Ghin's exclusive 10-seater Chef’s Table. The bespoke dining experience at Waku Ghin is largely inspired by seasonality and through this specially curated degustation menu, the brilliance of Chef Tetsuya shows in his array of imaginative meat and seafood dishes that reflect his vast knowledge of what’s in season and how best to prepare them. For what it’s worth, you won’t regret trying the marinated botan ebi, uni, and caviar on egg yolk confit. It’s a shot of pure brilliance so be sure to savour it for as long as you possibly can.

(Photos from: Alvin Tan and @chopesg)

Want a more laidback vibe? Check out these cafes in Joo Chiat.

More On This Topic
GuidesTime Out